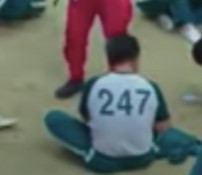 did not finish his traingle honeycomb in time

Hell
The Man With The Umbrella

Player 247 was in debt and chose to enter a high-risk competition to win money. After waking up in a large room with 455 other people, he signed a contract and took his photo. He managed to survive the first game, Red Light, Green Light, after most of the contestants had been wiped out. Afterwards, like everyone else, he was shaken and disgusted by deaths of the contestants. A vote was held if the game should continue thanks to the third clause, and it is unknown what he voted. However, the majority voted no. However, those who were willing to return could, and he returned, along with most of the other players, after he returned, he proceeded to Sugar Honeycombs.

Player 247 decided to pick the triangle dalgona, And Cut Out His Shape , When The Game Ended He didn’t Finish In Time And Got Eliminated